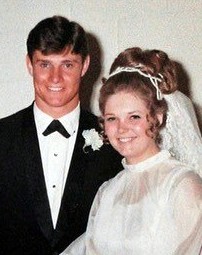 Larry Bronson, 72, crossed the river of life peacefully at home in Boise ID surrounded by loved ones at 2:30 am on Friday, January 1, 2021. He was diagnosed in April 2020 with a rare, incurable bone marrow/blood cancer (myelofibrosis) which took his life way too soon.

Larry was the eldest and leaves behind siblings Monica Bronson, Meridian ID; Gordon (Kim) Bronson, Shreveport LA; Renae Heinsohn, Boise ID; Jan McKenney, Kuna ID; and many nieces and nephews.
Before Larry was two years old, the family left South Dakota and began moving to follow the work of building the freeway system through Montana, Utah, and Idaho. He was always “the new kid in school,” even going to three different schools in one year.

Larry spent his junior and senior years at Jerome ID High School where he participated in football, basketball, and track. He was proud to be voted “Best Athlete” as a senior in 1966. Larry enjoyed seeing classmates at the class reunions where, at the 40th reunion, he was given the award for “Hair Most Like He Had in High School.” Lol Thank you to all of Larry’s classmates who sent messages which Joan read to Larry.

Larry earned a scholarship to play football for Boise Junior College (BJC) 1966-68 under coach Lyle Smith. He was also a walk-on member of the BJC basketball team. He earned an Associate Degree, then went on to earn a Bachelor’s Degree in Business from Boise State University in 1974. Larry was proud that later in life, he could still wear his letterman jacket from BJC. Go Broncos!
Larry worked in the data centers of the State Auditor and BSU. He also worked at a Savings and Loan for a while. Larry discovered he would rather work outdoors so began his career in construction. He worked for Peter Kiewit Sons Construction Company in the 1980s in Idaho, Nevada, and Colorado. His dad Orville also worked for Kiewit in the 1950s, 60s and 70s. Son Lars was an engineer for Kiewit building the San Francisco/Oakland Bay Bridge in the 2000s. Larry then began working for the Idaho Transportation Department in 1988 and helped build I-84, I-184 and the Flying Wye. He was very proud of upgrading the freeway system around Boise and other projects he worked on for ITD District 3. He retired from ITD March 1, 2011.

Larry was a long-time member of Good Shepherd Lutheran Church, Boise, and served as an Elder for many years. After retiring, he voluntarily managed the construction of the church’s new parking lot. He really enjoyed using his talents and being of service to the church. He valued the fellowship and friendships the church community provided.

In retirement, athletic Larry competed in the Senior Games in shot put and discus winning many medals. He also played softball with a fun group of “seniors.” And, after Joan retired in December 2011, they appreciated their time together and their time apart. Lol

In July 2009, Larry and Joan were together in a TV studio audience in Hollywood CA watching their five kids compete on FAMILY FEUD! They won five games and a new car! While there, the whole family also made sweet memories at Disneyland. With the money they won on FAMILY FEUD, all 11 of us went on a fabulous nine-day vacation to Honolulu, Hawaii over Thanksgiving 2010. Thanksgiving dinner was at a luau! Mahalo, ohana, for the beautiful memories!

Larry was so proud of his kids (four girls and a boy on the end). All five graduated from college: one in Education, one in Communications, and three in Engineering. Over time all five have achieved a total of nine degrees. His children and grandchildren are his greatest legacy.

Larry was extraordinarily funny, loving, caring, smart, hardworking; a cosmic cowboy. When asked what kind of music he liked, Larry would reply, “Both kinds, Country and Western!” He also loved taking Country Dance lessons in his cowboy boots at the Buffalo Club! He was a great dad/grandpa, spreading laughter, sharing his knowledge of sports and everything – keeping all the kids/grandkids curious, making life fun.

Creating delicious dutch oven meals and desserts for family, friends, and his coworkers at ITD District 3, was a favorite pastime. Some specialties were: stuffed Cornish game hens, sparkling potatoes, ribs, pineapple upside down cake and peach cobbler. He worked hard, but played hard, too. Larry coached all his kids in softball, baseball, football, and basketball. The other kids he coached remember him and his lessons, too. All five kids were athletes like their dad and mom.

Larry was a jokester and a storyteller. He never met a stranger and loved everyone – family, friends, neighbors, people he met working out at the Y, and he made friends at his doctors’ offices and his favorite restaurants.

After retiring, Joan and Larry signed with Anderson Talent Agency. They have done photoshoots, a commercial, and were extras in a movie. They had fun trying something new.

Larry cherished his times with his good friends. He met Jose Telleria (Boise) at work over 50 years ago. Since retiring, almost every Friday they would go to lunch and then on long drives exploring the countryside. Larry and Jose would bike all over Boise, and they made an awesome trip to northern Idaho to bike 70 miles on the Hiawatha Scenic Bike Trail. In 2000 Larry traveled to the Grand Canyon and Flagstaff with close friend Steve Samuelson. Larry met Jim DeBerry (Boise) at ITD. They would breakfast 3 to 4 times a month and fish whenever possible. Jim and Larry drove to South Dakota (where Larry has relatives) with their two labs to go pheasant hunting. Larry’s yellow lab Ole was his good buddy, too, from 2005 to 2017. Larry’s college friend Tom Cummings (Orofino ID) kept in contact with him over the years. Tom was Larry’s salmon fishing partner on the Clearwater River. Larry was an avid outdoorsman whose love for Idaho was unparalleled and shared that love with everyone within earshot.

Larry did some amazing things, like biking around San Francisco and across the Golden Gate Bridge with son Lars, deep sea fishing in the Pacific off the coast of Canada and in the Atlantic off Barbados where he caught a feisty wahoo with son-in-law Tony helping reel it in (took about an hour). The family dined on the delicious wahoo fish that evening.

Larry and Joan have visited eleven state capitols, gone to the Grand Ole Opry in Nashville, Graceland in Memphis, Dallas/Fort Worth, Las Vegas, Lake Tahoe, San Francisco, Seattle, Portland, Yellowstone in the winter, Yosemite in the spring. But his favorite travels were all over his adopted state of Idaho (anywhere and everywhere in the Gem State)!

Joan and Larry caught the international travel bug in 2017 exploring Norway and Sweden (their ancestors’ homes). It was beautiful and they felt right at home. In 2018, they went on a cruise with most of the family departing from Puerto Rico to St. Thomas, Antigua, St. Kitts, St. Lucia, and Barbados. Larry imbibed a little too much rum punch on the catamaran cruise around Antigua! Lol They had a fantastic time with family and experienced things they never knew existed and loved the whole adventure.

In January 2019 they spent a fabulous two weeks in Barbados with Lindsey, Tony, Teo and Lauren. They relaxed on the white sand beaches and explored all the historical sights and natural wonders of the island.

January 2020 was Larry and Joan’s last trip together to Fort Worth TX where the whole family gathered for the phenomenal wedding of Erika and JB. It was such a wonderful, beautiful, and exciting affair!
A heartfelt thank you to the team from St. Luke’s Hospice who helped us through this difficult time. Also, a sincere thank you to our caregivers Elizabeth and Phyllis who cared for Larry and the family every night.

From Larry’s favorite author, Louis L’Amour, “When I die, remember that what you knew of me is with you always. What is buried is only the shell of what was. Do not regret the shell but remember the man. Remember the father.”

Due to Covid-19, private family services are planned. A Celebration of Life will be held at a later date. In lieu of flowers, kindly make a donation in Larry’s name to your local food bank. Thank you to all who have sent their love to the family! Correspondence for the family may be mailed to Cloverdale Funeral Home, 1200 N Cloverdale Rd, Boise ID 83713-7805.

A Tribute Video for Larry can be found at https://youtu.be/glFhpVd8-Gc or search “Larry Bronson Memorial” on youtube.com.

To view a family video made in 2007, visit https://youtu.be/RvxnAkxFIY8 or search “Joan & Larry Bronson – A Love Story” on youtube.com.