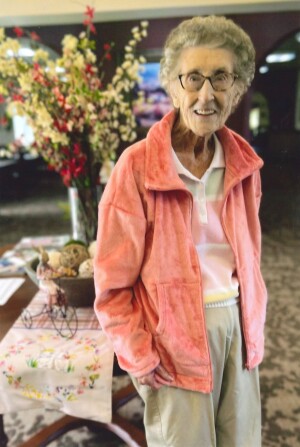 Rosemary Dawn Hamilton was born May 10, 1925 in Lewiston, Idaho to Rosetta E. Stoddard Hamilton and James W. Hamilton. She was the first of three daughters, followed by Laberta and Betty. She spent her first 17 years in Gifford, Idaho and moved to Lewiston her senior year. After high school, she had ambitions to attend a nursing school in Nampa, Idaho, but ended up in a school that taught her about sheet metal fabrication. She later worked for Boeing in Seattle as a riveter during WWII.

After the war, Rose enjoyed traveling with friends and eventually arrived in Nyssa, Oregon. It was here she met Jack D. Zittercob, and they were married October 22, 1948. That same year she went to work at the Amalgamated Sugar Company as a temporary job, but it turned into a 40-year career. She was the Superintendent Clerk and performed cost accounting duties by hand. She often worked 7 days a week during the sugar factory campaign and was an essential part of the overall success of the company. Her dedication provided vital support to the organization and she was highly regarded and endeared by her colleagues.

Jack and Rosemary built their life in Nyssa and raised their two children, Ann and Tom. They welcomed Ann on March 14, 1951, and Tom, March 12, 1956. Life was very fulfilling, and they were surrounded by lots of friends and family during this time. Jack suddenly passed away on May 26, 1966. Rose and her two children continued living in Nyssa amongst their loving and supporting community.

Rosemary later moved to the Boise area to work in a new operations facility with Amalgamated Sugar. She then married Stan Newman in 1983. Throughout their retirement, they enjoyed traveling to the Oregon coast, ventured to Europe with friends, and treasured family gatherings near and far. Over the next 30 years, they enjoyed the hustle and bustle of welcoming their grandchildren, great grandchildren, and great-great grandchildren into the world, whom they doted on lovingly. Rose particularly enjoyed expressing her love through baking for everyone. She was always ready with special treats for anyone who came to visit. She was generous, compassionate, affectionate, and gentle.

Rosemary died peacefully surrounded by her family where she lived at Plantation Place in Boise, Idaho on June 5, 2022. She is survived by her daughter, Ann Kouns (Bill), her son Tom Zittercob (Robyn), as well as Stan’s children, Vicki Binder and Gary Newman and all their grandchildren that were such a special part of her life. She is also survived by her grandchildren Jay Kouns (Maite), Jami Lough (Garry), Lillyan Housend (Eric), Jack Zittercob (Sara), and Robert Zittercob. She also has four great-grandchildren, Brooklyn Kouns, Brody Kouns, Charli Lough, and Wyatt Lough. Her love for her family was infinite, and she will be so dearly missed by us all.

As a family, we are so very grateful for all the extra love, support, and friendship so many have shown to Rosemary during her final years. She was deeply touched and delighted with those that surrounded her and we are so thankful and comforted knowing how well she was cared for. Special thanks to Morningstar and Plantation Place for treating our grandmother as their own.

A viewing will be held at 11:00 AM on June 13, 2022 at Cloverdale Funeral Home - Gibson Chapel with the funeral service starting at 12:00 PM. A private family interment will take place in Nyssa, Oregon.